On March 28 (Fri), the four Miss International 2014 Japan representatives
(Hongo Rira, Minagawa Chien, Osugi Remi, and Shichino Risa) received manner lessons.
Once again, the class was held in a classroom provided by ICB Finishing School at the company’s Ginza Office.
After reviewing the past lessons, they learned about table manners.
First, the teacher checked if they were wearing the appropriate clothes for a representative of Japan.
Then, through role play they learned how to bow correctly and how to exchange cards, after which they moved on to table manners.
Buffet, Western cuisine, Japanese cuisine… They all imply different table manners, and the Miss International participants learned
a lot about things they never paid attention to before during meals.
This was the last lesson, but we hope they will all put into practice the knowledge they acquired and shine even brighter as Miss International Japan representatives. 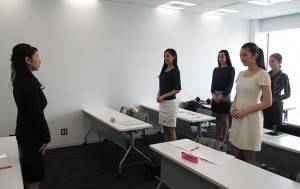 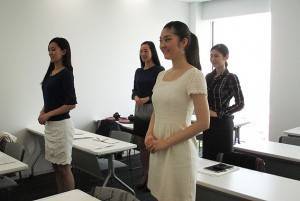 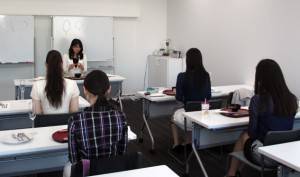